I. Introduction of quarantine grape seedlings:

The quarantine of grape seedlings can effectively limit the spread and spread of dangerous pests, and prevent the invasion of local pests and diseases. The quarantine pests of grapes in China are mainly: root cancer pathogens, white rot pathogens, black spot pathogens, rhizobium aphids, etc. In recent years, grapes have developed rapidly as an efficient and economic fruit tree locally. To implement pollution-free cultivation, first, the introduction of grape seedlings should be planned and organized to introduce seedlings that have passed plant quarantine. Prevent the invasion of grapes by viruses, germs and quarantine pests from the root. , 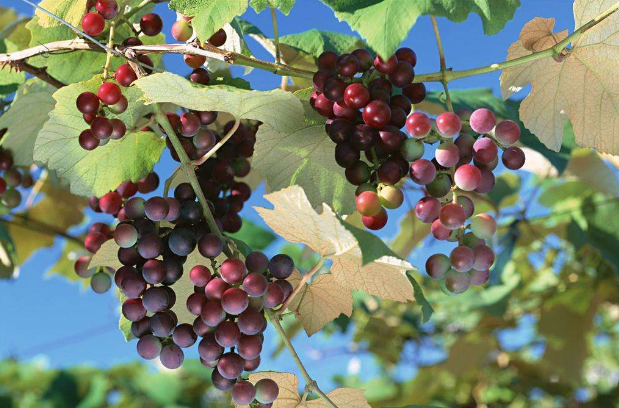 2. Scientific fertilization: The application of nitrogen, phosphorus, and potassium is reasonably distributed according to the growing season of the grapes throughout the year. According to the growth characteristics, yield of different varieties and the soil condition of the plant site, the method of soil testing formula is used to determine the amount of fertilizer, promote the normal development of the plant, and enhance the disease resistance of the tree. The types of fertilizers are based on the principles of applying more organic fertilizers and less chemical fertilizers, and increasing the application of phosphorus and potassium.

3. Reasonable pruning: Reasonable pruning can adjust the balance between vegetative and reproductive growth of grapes, and sparse overdense branches and leaves, and excessive fruit (fruit spikes) can enhance tree vigor and improve ventilation and light transmission conditions of the tree. It is beneficial to improve the disease resistance of plants and reduce the risk of pests and diseases.

4. Bagging of ears: After the ears pass through the bagging, the harm and infestation of grapes by disease and insects can be avoided, and the pollution of fruits during the control of chemical drugs is avoided. The bagging time is performed immediately after the grapes have been harvested (sparse fruit, fruit swelling treatment), and the earlier the young fruit period, the better.

5. Cultivation from rain: Grape's downy mildew, black pox, white rot, brown spot and other diseases are the main ways to spread the germs. In cultivation, multi-story, single-story and simple single-line rain shelters are set up in the vineyard for rain shelter cultivation. The plants began to mulch during the spring germination, and the film was uncovered after the rain according to different varieties. Grape plants can reduce the incidence of disease very effectively by sheltering from the rain.

1. Trap pests: Use insecticidal lamps and sex attractants to lure pests to kill them. According to the observation and forecast of insect pests, in the garden in advance of the emergence of insect pupae (or mature larvae), insecticidal lamps, sexual attracting bands, sweet and sour liquids are used to attract and lay adults to entice pre-lay eggs.

2. Four seasons clearing garden: clear the dead leaves, dead fruit, old vines, weeds and other weeds in the vineyard at any time. Keep the garden clean during the four seasons to reduce the source of pests.

3. Winter turning and killing insects: After entering the winter, the vineyards are combined with soil modification for deep turning to kill underground winter pests.

4. Blocking the pests: The vineyard covered the tree tray with plastic film before the shock in early spring, blocking the underground pests from getting on the tree. Conditions can be set up to support (rain cultivation) laying insect nets.

6. Artificial capture: Artificially trap the adults of Monochamus alternatus in the park from the end of April to early May.

7. Straw harvesting: About half a month before the normal deciduousness of grapes (in the middle of October in the local area), the grass is bundled at the junction of the grape's main stem and the main branch to collect the winter insects that have been planted. After the leaves have fallen, the grass is burned down.

The first is to improve the ecological environment in the vineyard, and use non-chemical agents as much as possible when treating grape diseases and insect pests.

The second is to plant green manure in the garden, and plant dense sources near the outside to promote the reproduction of natural enemies of pests.

Third, birds should be protected against hunting.

Fourth, the use of chemical drugs to control diseases and insect pests should be used with caution and minimize the number of times.

2. Promote the use of biological pesticides: The biggest feature of biological pesticides is that they do not pollute the environment, are not easily resistant to pests and germs, have low toxicity and no pollution, and are safe for humans, livestock, birds, and bees. Biological pesticides can be divided into three categories: mineral sources, plant sources and microbial sources. Mineral source pesticides are mainly stone sulfur mixture and Bordeaux liquid fungicide. Plant-derived pesticides include pyrethrin, allicin, arbutin, rotenone, matrine, nicotine and other pesticides. The microbial sources are mainly insecticides such as Bacillus thuringiensis, Penicillium, Beauveria bassiana, and fungicides such as Jinggangmycin, polyoxin, and agromycin 120.

At present, in order to ensure the control effect, chemical control is still the main measure to control grape diseases and insect pests. The grapes are cultivated in a pollution-free manner. In order to reduce the pesticide residues in the fruits and reduce the environmental pollution of the pesticides, chemical pesticides should be used scientifically in the control of diseases and insect pests, and try to achieve the multiple effects of good prevention, less pollution and low residue.

1.Master the principles of medication:

First, according to the forecast of pests and diseases, spray pesticides to kill pests at the critical time of the occurrence of pests.

The third is to properly dispense the dosage according to the instructions of the pesticide used, and it is not easy to increase and increase the concentration.

The fourth is to grasp the safe interval of pesticide reuse (usually 10-15 days), especially the application of all chemical pesticides should be stopped within 20 days before fruit harvest.

2. Chemical drug control for several main diseases and insect pests of grapes: Downy mildew: In the early stages of the disease, metalaxyl-manganese zinc 800-1000 times or Dubang Kelu 1000-1500 times were used to control the disease. Special medicine for the disease is sprayed. Botrytis cinerea: In the flower bud stage, the beginning of flowering and the early stage of Xiehua, the drugs were alternately controlled with 1,000 times faster clon, 600-800 times pyramidine and other drugs. White rot: From the beginning of the young fruit period to 20 days before the harvest, 500-600 times Dasheng M45, methyltobutin 1000 times, and Fumei Shuang 600-800 times can be used for rotating spray at the beginning of the disease. Stinger moth: According to field investigations and predictions, it is found that about 2-3 days after the emergence of adult worms (around the middle of May in the local area), 2000-3000 times of inulin are used to spray the new ones.