Xiaoxin has already told you that wireless sensor networks are widely used. The sensor node uses its built-in various sensors to measure the heat, infrared, sonar, radar, and seismic wave signals in the surrounding environment, including temperature, humidity, noise, light intensity, pressure, soil composition, size of moving objects, Many physical phenomena of interest such as speed and direction. The sensor nodes have good cooperation capabilities, and complete global tasks through local data exchange.

Due to the requirements of the node characteristics of the IoT sensor network , multi-hop, peer-to-peer communication methods are more suitable for wireless sensor networks than traditional single-hop, master-slave communication methods, and can also effectively avoid the long-distance wireless signal propagation process. Problems such as signal fading and interference encountered. Through the gateway, the sensor network can also be connected to the existing network infrastructure, so that the collected information can be passed back to remote end users for use. Wireless sensor networks also have the following characteristics: 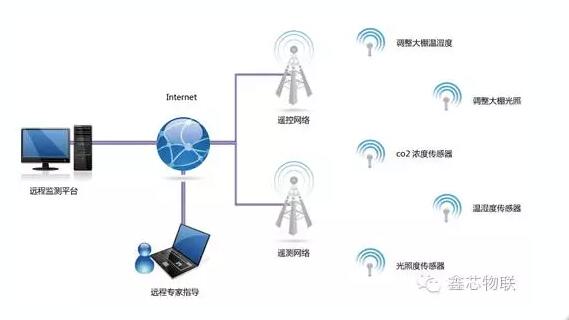 The topology of a sensor network may change due to the following factors:

① The sensor node fails or fails due to environmental factors or power exhaustion;

② Changes in environmental conditions may cause changes in the bandwidth of wireless communication links, and may even be intermittent;

③ The three elements of the sensor network, such as sensors, sensing objects, and observers, may have mobility;

④ The addition of new nodes. This requires the sensor network system to be able to adapt to this change and have dynamic system reconfigurability.

Sensor networks are particularly suitable for deployment in harsh environments or areas that are not reachable by humans. Sensor nodes may work in open air environments, be exposed to the sun or wind and rain, and even be damaged by unrelated personnel or animals. Sensor nodes are often deployed randomly, such as by broadcasting or launching "guns" to designated areas for deployment.

These all require that the sensor node is very sturdy, not easily damaged, and adapted to various harsh environmental conditions. Due to the limitation of the monitoring area environment and the huge number of sensor nodes, it is impossible to "care" each sensor node manually, and the network maintenance is very difficult or even impossible to maintain. The confidentiality and security of communication in sensor networks are also very important. It is necessary to prevent monitoring data from being stolen and obtain false monitoring information. Therefore, the software and hardware of the sensor network must be robust and fault-tolerant.

This idea of using data as a query or transmission clue is closer to the habit of natural language communication. So it is usually said that a sensor network is a data-centric network. For example, in a sensor network applied to target tracking, the tracking target may appear anywhere, and users interested in the target only care about the location and time of the target, and do not care which node detects the target. In fact, in the process of target movement, different nodes must provide the location information of the target.

Wireless sensor networks can be used in fine agriculture to monitor pests in crops, soil pH and fertilization. You can also track the migration of migratory birds and insects, study the impact of environmental changes on crops, and monitor the composition of the ocean, atmosphere, and soil.