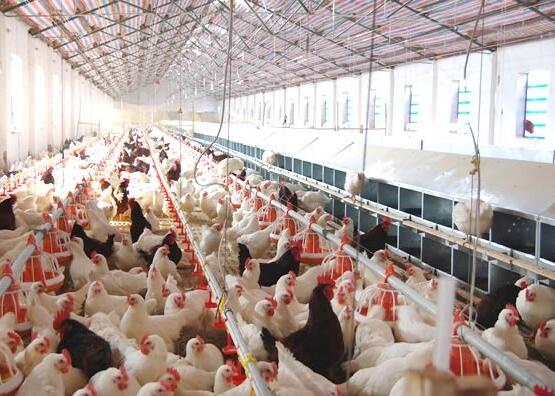 Ammonia is a kind of irritating gas. It is strongly alkaline when dissolved in water. Ammonia has a strong irritating effect on moist mucous membranes, which can cause respiratory diseases such as conjunctiva, upper respiratory epithelial membrane congestion, edema, etc. Decreased food intake and weakened resistance to disease have increased the risk of developing Mycoplasma septicum and reduced production capacity. The ammonia concentration in the chicken house-generally should not exceed 20 mg / L, usually using an ammonia concentration detector or in the absence of measuring instruments to judge based on the experience of the staff.

气体是含硫有机物分解而产生的一种分子质量大于平均空气质量的一种气体，鸡舍中的H2S气体多数是因为鸡蛋受损而产生的，臭鸡蛋加上通风不良会迅速造成舍内H2S气体含量增加， H2S气体沉于空气底部，故对鸡舍下层的鸡危害严重。 H2S gas is a gas produced by the decomposition of sulfur-containing organic matter with a molecular weight greater than the average air mass. Most of the H2S gas in chicken houses is caused by damaged eggs. Smelly eggs and poor ventilation will quickly cause the house The H2S gas content increases, and the H2S gas sinks to the bottom of the air, so it is severely harmful to the chickens in the lower layers of the house. It can cause keratitis, which in severe cases can lead to paralysis of the respiratory center and death. 气体会导致鸡的身体情况和抗病能力逐渐降低，导致鸡生产能力下降，容易发生疾病。 Long-term low-concentration H2S gas will cause the chicken's physical condition and disease resistance to gradually decrease, resulting in a decline in chicken productivity and prone to disease. 浓度一般不超过10毫克／升。 The H2S concentration in the hen house generally does not exceed 10 mg / L.

3. The hazards of carbon monoxide:

Carbon monoxide is a odorless and non-irritating gas. Generally, carbon monoxide is not produced in chicken houses. However, in some places, when a coal stove is used to heat up the chicken coop in winter, insufficient coal combustion will generate a large amount of carbon monoxide gas. Carbon monoxide has a strong toxic effect. It easily binds to the hemoglobin of the blood towel and is not easy to separate, causing hemoglobin to lose its oxygen-sparing function, causing the body to be hypoxic and poisoned. Carbon monoxide poisoning mostly occurs in the broiler house, because it is colorless and tasteless, and it is difficult to judge based on perception, so it is more threatening to chicks. In severe cases, a large number of chicks can die. The concentration of carbon monoxide in the chicken house is generally not more than 24 ml.

In the daily breeding process, the control of the concentration of each harmful gas must be done to ensure that the whole process of chicken breeding is safe and sound. Xinxin IoT Chicken House Environmental Monitoring System can monitor such harmful gases in combination with effective monitoring equipment to ensure the safety of chicken house breeding.